Jakarta (Indonesia Window) – Currently, the development of Indonesia’s digital economy and industry 4.0 is the fastest in Southeast Asia.

“Indonesia’s digital economy and industry 4.0 are the fastest in Southeast Asia. Indonesia has around 2,193 start-ups, the fifth largest in the world. Indonesia has five unicorns and 1 decacorn, ”said President Joko Widodo in his virtual remarks at the opening of the German exhibition, Hannover Messe 2021 from the State Palace, Jakarta on Monday (12/4).

At this international event, Indonesia was chosen as the official partner country, making it the only ASEAN country to receive this honor.

In his remarks, the president emphasized that in 2025, Indonesia’s industry 4.0 is expected to contribute to the national Gross Domestic Product (GDP) of 133 billion US dollars.

With 185 million people connected to internet services, or the fourth largest in the world, the progress of this industry will lead Indonesia to become the top ten global economic power in 2030.

Related to this, Indonesia invites Germany to partner and jointly realize digital transformation in Indonesia.

The Head of State added that Indonesia itself has prepared a road map for ‘Making Indonesia 4.0’ which was launched in 2018.

There are three main things that become Indonesia’s strength in realizing the development of industry 4.0.

“First, in the industrial era 4.0 strengthening human resources (human resources) is a necessity. Indonesia has a demographic bonus, which in 2030, the number of productive age in Indonesia will double, “he said.

The challenge, according to the head of state, is to prepare human resources capable of facing a future that will be filled with digital technologies such as big data, artificial intelligence, and the Internet of Things.

“I believe Germany can support strengthening Indonesian human resources through the development of vocational education, strengthening research, and strengthening technology-based universities,” he said.

Third, investment in green development, which according to the World Economic Forum has a business potential of US $ 10.1 trillion with the opportunity to open 395 million new jobs by 2030.

According to the president, the partnership between Indonesia and Germany for green development in the future is also one of the priorities for cooperation.

At the Hannover Messe which was held on April 12-16, 2021, Indonesia presented 156 ministries and institutions, State-Owned Enterprises, universities, and national private companies. 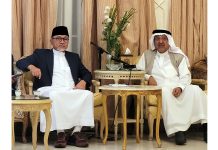 Indonesia’s disaster mitigation satellite to be launched from Japan in Oct....