A statement from the Indonesian Ministry of Energy and Mineral Resources received by Indonesia Window here on Monday mentioned that the production of FAME in 2020 was expected to increase by 10 million kilolitres (KL).

“During the past year B20 absorbed as much as 6.26 million kilolitres of FAME. It makes us optimistic that this year B30 can exceed the target,” ministry’s spokesperson Agung Pribadi said.

In the last two years, the production of FAME has continued to increase. Even the realization of production exceeded the target of 8.37 million KL from that set of 7.37 million KL.

“We hope FAME to be mostly used by the transportation sector,” Agung said.

The use of B30 which mandated by the Indonesian government has been receiving positive responses from people.

Even Indonesia becomes the first country in the world to implement the B30 mandatory program.

Meanwhile in 2020, the Ministry of Energy and Mineral Resources projects that foreign exchange savings will reach more than US$4.8 billion.

In order to improve the quality of biodiesel, the government is construction some green refineries, one of which is Plaju refinery in South Sumatra province with a capacity of 20 thousand barrels per day.

The construction of the facility is expected to be completed in 2024. 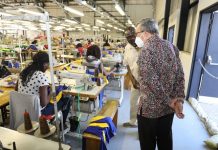 Over 400,000 people perform umrah since reopening