Jakarta (Indonesia Window) – A subsidiary of state oil and gas company PT Pertamina, which is also a Contractor of Cooperation Contract under the supervision of the Oil and Gas SKK (Special Work Unit) or locally known as SKK Migas, increases the production of the Akasia Bagus (ABG) -007 well located in Jatimunggul Village, Trisi District, Indramayu Regency, West Java Province.

The ABG-007 well is the last drilling well from the three drilling projects of the  Bambu Besar (BBS) and the ABG in 2019, according to the SKK Migas’ website as  quoted in Jakarta on Monday.

The results of the test on the well advancement have produced about 324 BOPD (barrels of oil per day) and 0.075 MMSCFD of gas (millions of cubic feet of standard gas per day) in a natural spray. These results have exceeded the initial target of 200 BOPD.

Thus, the last three advancement wells in the Good Acacia Structure have exceeded the target in the structure development plan.

While one ABG-001 well produces gas with a flow rate of 3.3 MMSCFD.

The next development project is the step out well (ABG-STO01) in the Akasia Bagus Structure in 2020 which is expected to increase reserves and contribute to oil production for Pertamina EP. 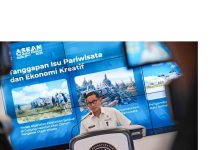