Jakarta (Indonesia Window) – Under a business as usual scenario, emissions from the electricity sector are expected to reach 0.92 billion tons of carbon dioxide by 2060.

In overcoming the condition, Indonesia’s state-owned electricity company (PLN) has launched a strategy to become a clean and green electricity company, one of which is to stop the construction and gradually end steam power plants operation in the country.

That was highlighted by PLN’s President Director Zulkifli Zaini when conveying the decarbonization program as a commitment to reduce carbon emissions in the electricity sector in a series of discussions at the 26th Conference of Parties (COP) in Glasgow, Scotland.

“PLN has an important role in driving green energy growth in Indonesia. We are committed to decarbonizing,” said Zulkifli in a statement received here on Tuesday (Nov. 2).

At the same time, the electricity company will invest more to accelerate the increase in the capacity of renewable energy-based power plants to 20.9 GW, as well as develop electricity storage technology in the form of large-sized batteries, and carbon and hydrogen capture technology.

To achieve carbon neutrality by 2060, PLN will need an investment of more than 500 billion U.S. dollars.

In order to accelerate that target, PLN will adjust electricity tariffs for customers, invest on large-scaled projects, and implement high technologies. In addition, PLN’s customers should also switch fossil-fueled equipment to low-carbon ones. 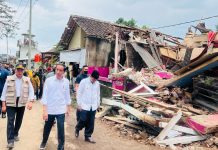