Jakarta (Indonesia Window) – A total lunar eclipse will occur on November 8, 2022, in Indonesia with a total duration of 1 hour 24 minutes 58 seconds and an umbral duration (partial + total) for 3 hours 39 minutes 50 seconds, according to the country’s National Institute of Aeronautics and Space (LAPAN).

The width of the total lunar eclipse this time is 1.3589 with a distance of 0.2570 from the center of the umbra to the center of the moon. This eclipse is included in the 20th eclipse of 72 eclipses in the Saros 136 Series (1680-2960), Andi Pangerang, a researcher at the Research Center for Space, said in a statement on the LAPAN website received here on Monday.

The following is the times and areas in Indonesia, where the lunar eclipse can be observed for each eclipse contact: 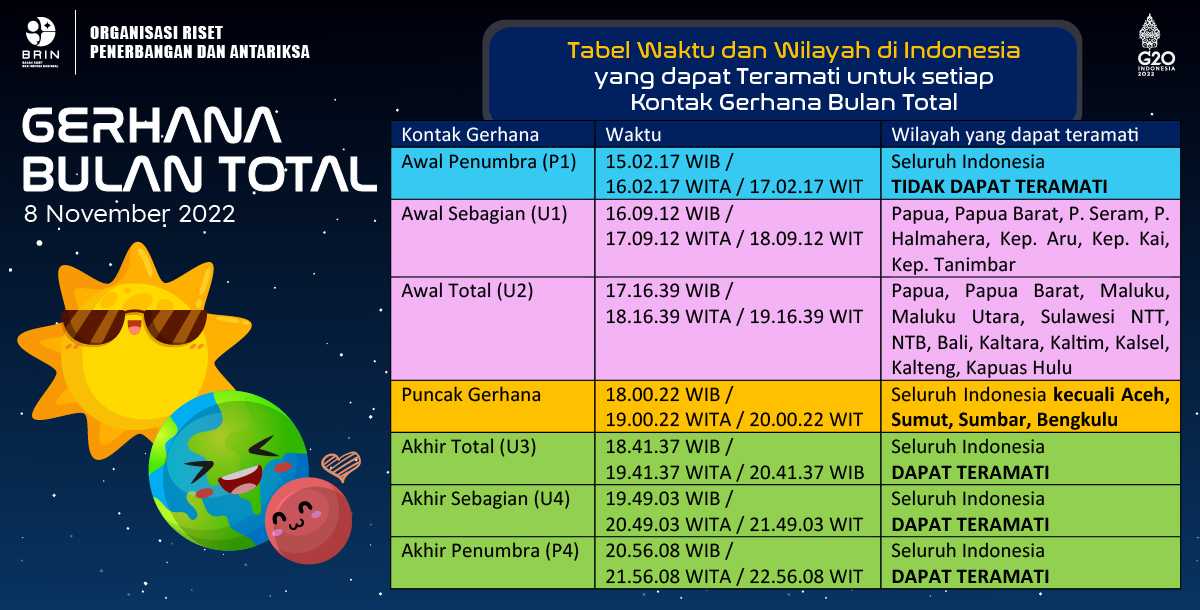 When the moon enters the umbra, the color of the umbra tends to be black. As the moon is completely within the umbra, the moon’s color will become reddish. This is due to the Rayleigh scattering mechanism that occurs in the earth’s atmosphere.

The Rayleigh scattering that occurs during a lunar eclipse is the same as the mechanism when the sun and the moon appear reddish in color when they are at low horizons and the sky has an orange hue when the sun rises or sets.

In addition, during an eclipse, no sunlight can be reflected by the moon as during the full moon phase. Eclipses can become darker or darker in color if particles such as volcanic ash scatter the light.

The impact of a total lunar eclipse on human life is that the tides are higher than on normal days when there is no eclipse, full moon or new moon.

A total lunar eclipse is an astronomical phenomenon when the entire surface of the moon enters the earth’s umbra. This is due to the configuration between the moon, earth and sun forming a straight line.

This is because the moon’s orbit is tilted 5.1° with respect to the ecliptic and the time taken by the moon to return to the same vertex is 2.2 days shorter than the time it takes the moon to configure with the earth and sun in a straight line, thus, the moon is not always in the plane of the ecliptic at the full moon.

Foreign tourist arrivals in Indonesia increase to 18,500 in February 2022