Bogor, W Java (Indonesia Window) – Being located on an active tectonic plate, Indonesia is rich in many kinds of landforms worth visiting or even studying especially by geologists as the areas are located in geopark sites.

Among the landforms is the one in Bantar Karet village, West Java province’s district of Bogor, home to waterfalls whose waters cascade to a beautiful mini canyon where visitors can swim in clean and clear running waters.

The locals call the site ‘Curug Love’ whose formal name is Cijerai Waterfalls whose waters stream down a pool in the shape of heart with its walls made of a sedimentary rock.  Curug in local dialect means waterfalls.

Curug Love caretaker Diding said he has to clean up the beautiful natural pond and the creek so as to keep the waters clean and clear, and make the surrounding environment free from waste.

Although not many people know this lovely geological site, several foreigners including those from Germany, South Korea and China have visited this tourist destination in the pluvial district of Bogor, said Diding who is a former security man of Indonesia’s mining company Aneka Tambang (Antam).

“I was asked to take care of the waterfalls by a director of Antam that owns the gold mining concession in Pongkor area,” said Diding who also manages a stall selling drinks and foods to serve visitors.

Visitors should pay 10 thousands rupiahs (around 0,7 U.S. dollars) per person to play waters in the pool, according to Diding, adding that the money collected is only for cleaning services.

Among holiday makers who visit Curug Love are those from all walks of life including nature observers, journalists, families, nature lovers, bikers and students.

A student who was not available to be named said, “it is a breathtaking atmosphere, and so beautiful. I think I must go down the fantastic pond and play with clear waters”.

The girl who is a student of a noted university in Bogor said she visited Cijerai Waterfalls for the first time after she was told by her friends about the beauty of the natural tourist site.

Cjerai Waterfalls where people can inhale fresh air and enjoy the beauty of the nature are located about 94.8 kilometers to the south of Jakarta or about two hours and 27 minutes by car from the Indonesian capital city.

Curug Love is precisely situated in Bogor’s area of Pongkor which was decided by the central government as a geopark in November 2018.

According a geopark observer, Wieke Libertina, geopark is an area where geological features and humankind life are integrated in an harmonious way that the natures are protected as they support socio-economic life of the inhabitants.

Libertina who studied geology at state University of Gajah Mada in Indonesia’s province of Yogyakarta cited as an example Curug Love in Bantar Karet village which has been providing such amount of clear waters to the villagers who use the natural resources to meet their daily needs, including irrigation of their paddy fields and plantations.

“In addition, the small-scale waterfalls have a cliff like an antelope canyon structure in Arizona, United States.  The waterfalls cascade to a pool which is good for swimming, and thus the site is interesting for people to visit and enjoy the nature,” she said.

However, such public facilities as toilets, praying rooms, and safe playground for kids have not been properly available. Even, the access to reach Curug Love is rather difficult as there is only a small, narrow uphill path which could be very slippery, especially during the rainy season, she noted.

Curug Love which is surrounded by rice fields where local farmers cultivate their farmlands and make a living is located in one complex with other geopark sites including Cikaung Waterfalls and Sawah Lega rice field in Bantar Karet Village, Bogor.

Likewise, Cikaung Waterfalls cascade and flow to the rice fields including those in Sawah Lega from which local people make them a source of living. However, as the waterfalls are still pristine, the access to the site is rather difficult as the uphill road leading to the geopark is only covered with gravels making small cars not easy to pass through.

Number of Indonesian students in Taiwan increases amid pandemic 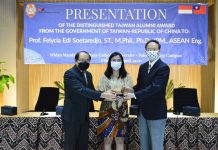