Jakarta (Indonesia Window) – Nearly 2,400 liters of sanitizers are used daily to clean and disinfect the Grand Mosque during the 1441 Hijri/2020 hajj pilgrimage to curb the spread of COVID-19, the Saudi Press Agency reported on Saturday (Aug 1) quoting local officials.

Out of the 2,400 liters, around 1,500 liters of sanitizers are used to clean surfaces and the remaining 900 liters for manual sterilization. All cleaning agents are environmentally friendly.

In addition, more than 1,050 liters of luxurious perfume are used to scent carpets and prayer mats, as well as the best air freshener specifically brought to the Grand Mosque.

The extraordinary sanitation effort was carried out by the General Presidency for the Affairs of the Two Holy Mosques to ensure the safety of the guests of Allah ﷻ, as well as the workers.

The sterilized parts of the Holy Mosque include mataf (an area for performing tawaf or circumundulating Kaaba seven times), mas’a (an area for sa’i ritual which means running between Shafa and Marwah seven times), and outer yards of the holy complex.

The cleaning and disinfecting were carried out after the pilgrims performed tawaf ifadhah (after wuquf in Arafat) and sa’i on Friday (July 31), which is the day of Eid al-Adha (the 10th of Dhulhijjah).

Wuquf is being silent when praying.

The two rituals are included in the four pillars of the hajj pilgrimage which must be carried out by the pilgrims to complete all the rituals.

The General Department for Technical and Service Affairs, and the Department of Cleaning have deployed more than 3,500 male and female workers with 95 modern cleaning equipment to clean and sterilize the entire building of the Grand Mosque at least 10 times every day. 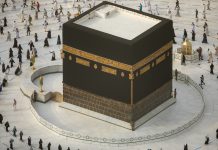 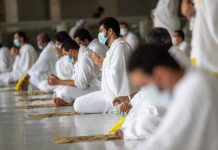 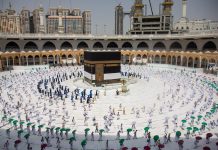