Jakarta (Indonesia Window) – Located between the Pacific and Indian oceans, and at the confluence of three large earth plates of Eurasia, India-Australia and the Pacific that make up the ring of fire, Indonesia is definitely rich in unique geological features.

Meanwhile, thousands of tribes with a variety of cultures, most of which are still preserved until now, make the earth’s wealth more amazing.

A number of places in the country have been designated as geoparks where the uniqueness of the earth and cultural richness are integrated, showing the relationship between these two aspects that form a harmonious community life.

Batur UNESCO Global Geopark is located northeast of Bali, covering an area of ​​370.5 square kilometres, at an altitude of 920-2152 meters above sea level.

Batur Geopark consists of an outer caldera wall that surrounds the inner caldera wall, Mount Batur and its lake. Most of the Bukit Bukit Batur and Payang Nature Tourism Parks are protected forest areas which are included in the UNESCO Global Geopark.

Mount Batur is one of 127 active volcanoes in Indonesia, and an important component of the Pacific Ring of Fire.

The economy of rural communities is mainly dependent on agriculture and tourism.

Kintamani sweet orange and civet coffee are products from the Batur area, besides wood crafts, bamboo and wood carvings.

Located on the border of an active subduction zone between the Eurasian and Indo-Australian plates which continue to coalesce four mm / year, Ciletuh-Pelabuhan Ratu has rare geological diversity, including the mélange complex known as the oldest rock formation in West Java (formed around 23 to 15 million years ago).

Hot springs, geysers, and geothermal sites in the northern region are among the geological resources found in the area.

They have a variety of livelihoods that most of the income is generated from the fisheries sector because of the long coastline which is directly connected to the Indian Ocean.

The beach in the geopark is also a surge for surfing, paragliding, and rafting as well as canoeing, rock climbing waterfalls, snorkelling, diving, fishing, and trekking in forest areas.

Until now some local people still maintain the ancestral traditions of Kasepuhan, especially in agriculture such as rice farming called tatanen.

Located in the Southern Mountains of East Java, the Mount Sewu UNESCO Global Geopark extends from the east to the west as long as 120 kilometers.

The depression zone which is home to active volcanoes of Merapi and Lawu borders the northern part, while in the south it borders the Indian Ocean.

At an altitude between five meters and 700 meters above sea level, there are a range of Upper Paleogen rock mountains and thousands of limestone hills.

Mount Sewu is also rich in biodiversity besides archaeological, historical and cultural aspects.

The Pacitan stone culture originated from the Paleolithic to Neolithic times in Southeast Asia. About 1,802 square kilometres of the area keep traces of prehistoric settlements.

The diversity of karst (limestone) landscapes, rocks, fossils and geological processes in Mount Sewu is protected by Government Regulation 2008 as a Geological Reserve Area.

UNESCO calls it “the bridge between Asia and Australia”.

UNESCO’s Rinjani-Lombok Global Geopark is located on the island of Lombok, in Indonesia’s islands of Nusa Tenggara with diverse landscapes, as well as varied forest types ranging from savanna and semi-autumn forest to low montane pine forests and tropical montane pine forests.

Volcanoes dominate the geology of the Lombok island, where volcanic complexes develop due to subduction of the Indian Ocean Plate under the Southeast Asian Plate.

The old volcano complex consists of Mount Punikan and Mount Nangi in the west and Mount Sembalun in the east, while Mount Rinjani rises at an altitude of 3,726 meters and is the highest peak in the volcanic complex.

The Samalas Volcano caldera which is filled with a combination of meteoric and hydrothermal water has formed a lake called Segara Anak. In the middle of the caldera a young volcanic cone, Mount Rawan and Mount Barujari appear.

About 80 percent of Lombok’s population is part of the Sasak ethnic group, which is close to that of the Balinese ethnicity, and is largely Muslims, while the other 20 percent is Balinese, Javanese and Arabic.

The Sasak people are multi-ethnic and multicultural and represent the acculturation of a culture. Hinduism, Buddhism and Islam have influenced the history of the Sasak people in Lombok.

The cultural heritage of Lombok appears in the form of temples or traditional style mosques.

Other archaeological findings include the Buddha statue of Awalokiteswara, Nekara, and gravestones with Chinese and Arabic letters.

Pre-historic ancestral settlements of the Sasak people are found in coastal and inland areas. 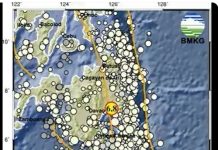 Women, disabilities expected to be more involved in development

Agency reaffirms drug syrups for children as informed by WHO